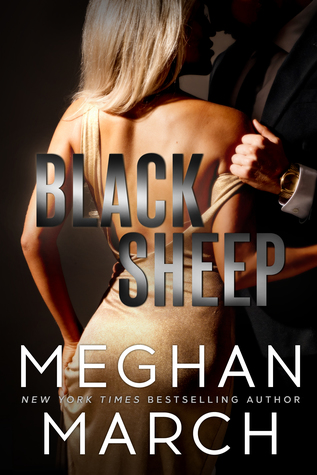 Every family has a black sheep.
In the infamous Casso crime family, that black sheep is me—Cannon Freeman.
Except I’m not a free man. I’ve never been free. Not since the day I was born.
I owe my loyalty to my father, Dominic Casso, even if he won’t publicly acknowledge me as his blood.
I’ve never had a reason to go against his wishes… until I met her.
Drew Carson turned my world upside when she walked into my club looking for a job.
Now, my honor and my life are on the line.
Going against my father’s wishes might buy me a bullet straight from his gun, but black sheep or not, it’s time to make my stand.
She’s worth the fallout.

Queen of suspense-filled and angst-ridden cliffhanger endings, Meghan March didn’t disappoint with Black Sheep! She’s delivered an addictive and enthralling narrative—a forbidden romance between two complete opposites caught within a twisted situation that can’t be seamlessly unravelled. Full of grit and danger, the allure of this duet will render you riveted and invested in the sordid details of justice and retribution.

“You don’t know what you want from me because you’ve never had a man determined to set you on fire, just so I can fan the flames. I’m going to show you.”

By intertwining herself with a formidable man dripping in sheer confidence and utter dominance, Drew Carson is flirting with inevitable danger. Despite said danger emanating from a deeper, darker world, her unwavering determination is admirable though somewhat foolish as she endeavours to find closure. She’s a fascinating enigma—a combination of numerous identities and buried secrets that form into this interesting, multifaceted character.

“There are a million things that should stop me, but not a goddamned one will. I staked my claim. I meant it. You are mine.”

Cannon Freeman exudes uncontested dominance. Consuming and intense, there’s no refuting the irresistible allure that surrounds this enigmatic anti-hero, or the commanding aura shrouding his notable presence. Despite having criminal associates, there’s a certain amount of surprising goodness lurking inside this hero as he carefully treads the delicate line between corrupt and honest that eases the tension in this duet.

“Careful. You’re going to give me the impression you’re running from me… which will only make me want to chase you.”

Drawn together by an immediate connection and irrefutable chemistry—despite the forbidden nature of it—Drew and Cannon have an earnest and fervent relationship, a fiery storm of wanton passion, that is on edge waiting to be unleashed. When it does, it goes up in flames full of desire and hidden affection, you can feel the heat singe the pages!

Black Sheep is fast-paced, but the suspense remains intense and enthralling. Shrouded in secrets and revenge, the excitement of witnessing certain events unfurl will leave your mind reeling and emotions soaring because, as it is with Meghan March, the ending is always a nail-biting, teeth-clenching cliffhanger.