Rewrite the Stars
by Charleigh Rose

Evangeline Thorne is privileged.
Beautiful and popular, if not a little jaded.
A chance encounter with a green-eyed stuntman sets off a chain of events that turns her perfect, little world upside down.
Short on options and desperate for adventure, she joins the traveling carnival for the summer.
Thrust into a world full of drama, deception, and secrecy, Evangeline tries to find herself and protect her heart in the process.

Sebastian McAllister is cursed.
He knows better than to think otherwise.
He’s content to live out the rest of his life traveling the country as one of the four Sons of Eastlake, seeking thrills the only way he knows how.
The one thing he doesn’t see coming is the spoiled blond with stars in her eyes.
The only problem is, the more time he spends with her, the more hope starts to stir in his dormant heart.
Too bad hope is a dangerous thing when you’re a McAllister. 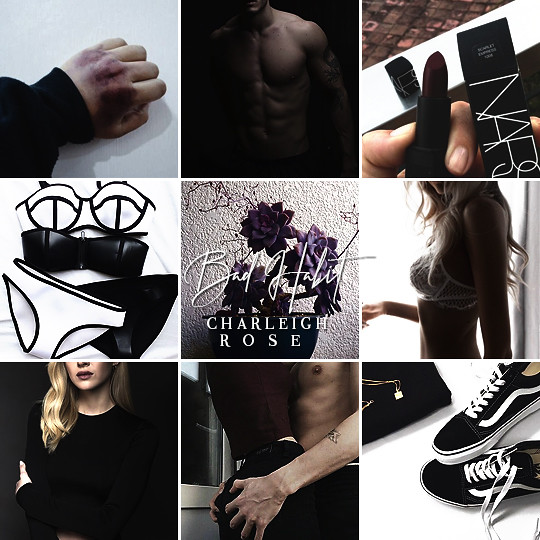 BRIAR
I was infatuated with Asher Kelley the moment he came tumbling through my brother’s window five years ago.
Even bruised and bloodied, he was the most beautiful boy I’d ever seen.
We couldn’t ever be together.
I was too young, and he was too untouchable.
He was too troubled, and I was too naive.
But the heart is rebellious, and mine decided it didn’t care about any of those things.
As I got older, harmless flirting turned to stolen moments in dark corners.
Until one day, he was gone without a trace.
Now, three years later, he’s back.
Callous and cruel.
He’s my brother’s best friend. My parents’ worst nightmare.
I should hate him.
But like a Bad Habit, I can’t quit him.


ASHER
I was drawn to Briar Vale from the first time she looked up at me with stars in her big, blue eyes.
She was just a kid, nothing but elbows and knees, but she was the most beautiful creature I’d ever seen.
We could never be together.
I was too old and she was too off limits.
She was too good and I was too fucked up.
Eventually, the temptation became too much to resist.
I risked everything for a kiss and she betrayed me.
Three years have passed and I’m forced to see her again, but now she’s all grown up.
She’s my best friend’s baby sister. My downfall.
I hate her for what she did.
But she’s always been my drug of choice.

It often takes me forever to discover new authors, or to start reading authors I’ve had sitting on my list for ages. Why oh why? I’ve been missing something good here. Whilst the writing is reminiscent of other stories I’ve read before, I’m going to push that thought aside for now.

Enemies to lovers is my absolute favourite, yet Bad Habit is so much more than that. From best friend’s little sister, forbidden romance and friends since childhood mixed with some angst, this story contains a plethora of tropes that most readers know and love.

People say it’s better to have loved and lost than to never have loved at all, but those people have never been in love with Asher Kelley.

Asher Kelley disappeared three years ago, leaving Briar Vale disappointed, heartbroken and questioning everything that transpired between them when she was fourteen. When he finally returns to Arizona, the troubled boy Briar fell in love with is broodier, moodier and all man.

With Asher’s return to Arizona, a hometown filled with many terrible memories and the woman who still holds his heart in the palm of her hand, old feelings resurface, making everything more complicated than they expected.

Now that his shoulders are broader, his chest and arms bigger, and his jaw more chiseled…he’s a man. And he’s perfection.

I have a weakness for asshole heroes.

And the broodier the better in my opinion.

Battered and bruised throughout his childhood, Asher is jaded and angry towards the world, especially towards Briar, who betrayed him in inconceivable and unimaginable ways. Tall, dark and handsome, as well as aloof and broody, Asher is flawed and damaged.

But underneath his seeming detached exterior, he does possess a protective nature, he is capable of loving when provided the opportunity and he’s passionate about Briar, even when he wants to desperately despise her with every facet of his being.

Bad habits are easy to make and impossible to break, and Asher was the worst addiction of them all. I let him crawl inside my body, and he burned me from the inside out, leaving nothing but ashes in his absence.

Briar is someone with unwavering commitment and loves unconditionally. She’s sweet. Caring. Understanding. She’s confident, self-assured and mature beyond her years. While Briar does display moments of immaturity (really, who doesn’t?), she’s at least aware and has the ability to recognise such actions and thoughts.

Bad Habit will draw readers in. Beginning with flashback scenes, setting up Asher and Briar’s tumultuous, forbidden relationship, the present will throw us into a love/hate relationship. Uncertainties fester and doubts will bubble, but the sexual chemistry between these two overrides everything. 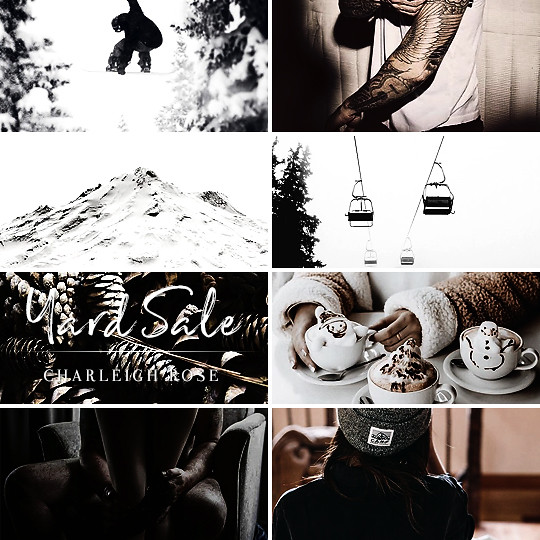 Mollie
I was freshly fired from my job and betrayed by my boyfriend.
It was a new low for me.
A one-night stand with an arrogant stranger was just what I needed.
I didn’t know that he was a famous snowboarder, or that he’d give me the best sex of my life.
I wasn’t ever supposed to see him again.
Fate had other plans.

Cam
I was young and rich with the whole world at my fingertips.
I was in my prime.
A one-night stand with a hot little tourist on the rebound was the perfect way to spend my weekend.
I didn’t know she’d leave in the middle of the night, or that I’d wake up wanting more.
I never thought I’d see her again.
Now she’s back.
She’s been keeping a secret.
One that will change everything.

Why has it taken me this long to finally read something written by Charleigh Rose?! Someone slap me, because I have been doing a disservice to myself.

And the excerpt for Rewrite the Stars is so intriguing. Who would’ve thought a romance set amongst the carnival could be capturing? I’m keen to read Evan and Sebastian’s interesting romance.

”Love doesn’t wait until you have your shit together. It just happens.”

Of course, there is also Camden and Mollie’s sweet and passionate encounter. From scorching and tantalizing scenes, to tender moments, it is easy to fall in love with this couple.

Needing a distraction after losing her job and her boyfriend, Mollie wants a rebound. And who is more perfect than Camden, a charming and tattoo covered professional snowboarder?

I normally don’t find novellas enjoyable because more often than not the pacing is off and everything is rushed. But Charleigh Rose did wonderfully keeping an even pace and unfurling details bit by bit, keeping the transition from lust to love believable.