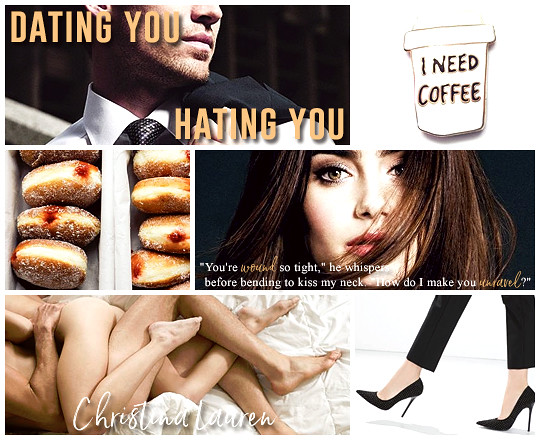 All’s fair in love and work. The first standalone romance by New York Times and #1 international bestselling author Christina Lauren (Beautiful Bastard) is a sexy, compulsively readable romantic comedy that dives headlong into the thrill and doubt of modern love.

Despite the odds against them from an embarrassing meet-awkward at a mutual friend’s Halloween party, Carter and Evie immediately hit it off. Even the realization that they’re both high-powered agents at competing firms in Hollywood isn’t enough to squash the fire.

But when their two agencies merge—causing the pair to vie for the same position—all bets are off. What could have been a beautiful, blossoming romance turns into an all-out war of sabotage. Carter and Evie are both thirtysomething professionals—so why can’t they act like it?

Can Carter stop trying to please everyone and see how their mutual boss is really playing the game? Can Evie put aside her competitive nature long enough to figure out what she really wants in life? Can their actor clients just be something close to human? Whether these two Hollywood love/hatebirds get the storybook Hollywood ending or just a dramedy of epic proportions, you will get to enjoy Christina Lauren’s heartfelt, raucous, and hilarious romance style at its finest.

When Beautiful Bastard was originally Twilight FanFiction under the title, The Office, I fell in love with Christina Lauren’s writing then. I loved the intense chemistry and enemies-to-lovers passion they incorporated, the constant push and pull, the fiery independent heroine and the exacting, womanising hero that deserved to have some notches taken down.

It pains me to say this: Dating You/Hating You isn’t my jam. Cup of tea. Whatever. I was hoping this would be similar to Beautiful Bastard. Instead, reading this made me feel like a university student all over again, having to dissect every minute detail and source the meaning behind every word, because this story went from contemporary romance to work environment politics.

So, you can imagine how conflicted this story makes me feel.

Simply put, Evelyn Abbey is my former almost-girlfriend-turned-archnemesis-turned-tentative-ally whom I would now very much like to permanently seduce.

Dating You/Hating You lacks the fluidity CLo’s other stories have. Rather than showing you anything, it explains every single detail imaginable, with little bits of dialogue weaved throughout to slice through the dryness. You are essentially reading a wall of text.

Using dual perspective, we learn and understand the characters and their motivations. We follow Evie Abbey and Carter Aaron as they traverse through the tough waters of Hollywood’s talent agencies, hating and loving each other within an office setting as they compete each other for the same position.

Evie Abbey
Where to begin? One of my favourite things about CLo is the amazing fact that they write intelligent, incredibly confident and highly independent heroines. They are fiery, often times stubborn, but ambitious and aspiring characters that you can’t help but idolise.

Evie is emotionally immature. While it is admirable that she’s a strong advocate for women’s rights, she highlights the difference in treatment between genders and mentions unequal salaries, unequal representation, etc. a lot.

Before crucifying me, Evie is someone who brings up the topic whenever something inconvenient happens. To me, that kind of behaviour shows she’s incapable of recognising the difference between an issue involving sexism and an issue involving the workplace.

She’s always very quick to accuse others, especially Carter, when something doesn’t benefit her. And she’s always assuming Carter is betraying her by not divulging every decision he makes.

Carter Aaron
Carter is an adorable and quirky humorous mess.

And that’s about where his appeal ends. He is awfully passive, kind of weak really, as he never steps forward to praise Evie’s work ethic and credibility in front of Brad Kingman. I do love a brilliant female character. However, I also love when the lead male character is on equal footing with some backbone and observational skills, rather than being a flimsy wet noodle.

“I’m notoriously married to my job.”
“That’s super convenient because so am I. It’ll be like we’re cheating on our jobs with each other.”

Chemistry, romance and storyline, or lack thereof…
I was head cheerleader of Team Evie and Carter before the office antics started. They meet each other while attending a mutual friend’s Halloween party, cute things happen and then that spark quickly fizzles when they become sworn enemies.

Dating You/Hating You would work wonders as a romantic comedy film.

But the office antics these two engaged in didn’t make me laugh, or my mouth twitch slightly. Whatever chemistry and romance Evie and Carter shared disappeared as swiftly as it started. It lacked the iconic push-pull, the constant bickering and the anticipated arguments that you find in enemies-to-lovers romance.

Regarding the ending: I predicted everything.

And it totally undermined the entire feminist subplot being pushed throughout.